An Ant Pass is an inventory item that is required in order to participate in the Ant Challenge. Players can only have a maximum of 10 ant passes in their inventory at a time (unless they had more than 10 passes before the 4/5/2019 update, purchased them from robux packs, or received them from quests).

An ant pass can be used by stepping on the pad in front of the Ant Challenge and pressing "E" on the player's keyboard or by clicking on the prompt. 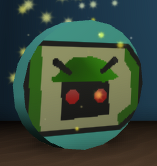 A player with more than 10 ant passes in their inventory at once.