Leaves; every field in game (except the Ant Field).

N/A; 1% chance from leaves.
The Aphid is a mob that has a low chance of spawning from collecting leaves (though the chances can rise if a player hasn't entered the field in a long time). Its level and health correlate to which field the aphid spawns in, like Rogue Vicious Bee. Sharing a similar trait with Tunnel Bear, Coconut Crab, chicks, hostage chicks, Wild Windy Bee, and the Mondo Chick, aphids despawn after 30 seconds. The timer is shown above its health. Aphids attack in a similar pattern to stick nymphs and giant ants, as it follows the player around slowly.

Defeating an aphid awards 10 battle points (20 if defeating 1 of the 3 rare types), bond, and various other rewards. Higher leveled aphids, regardless of type, having a higher chance of dropping better rewards. Some rewards only drop on a cooldown, meaning that a reward may not reappear for some time.

The Rage Aphid is one of the 3 rare types of aphids, the others being Armored Aphid and Diamond Aphid. Rage Aphid has more health than a normal aphid and can inflict massive damage to players. They look like red bugs with green eyes, legs, and antennae, looking similar to a Gifted Rage Bee and Gifted Spicy Bee.

The Diamond Aphid is one of the 3 rare types of aphids, the others being Rage Aphid and Armored Aphid. The Diamond Aphid possesses more health than the other aphids, which allows it to survive for a longer period of time. It looks like a sky-blue bug with white eyes, legs, and antennae, looking similar to a Diamond Bee. 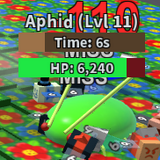 An aphid in the Mountain Top Field.

A rage aphid in the Pepper Patch. 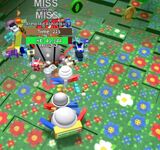 An armored aphid in the Cactus Field.

A diamond aphid in the Blue Flower Field.

The model for each aphid.
Retrieved from "https://bee-swarm-simulator.fandom.com/wiki/Aphid?oldid=349006"
Community content is available under CC-BY-SA unless otherwise noted.