The Badge Bearer's Guild is a shop located near the Pine Tree Forest. The player will need at least 15 badges to be given permission to enter the shop.

The shop sells a set of tools called sprinklers. There are currently 5 sprinklers that can be bought in the shop. The player can also find the Blender here, where they can craft certain items from other materials. There is a star jelly token on top of the Blender that requires an accessory that boosts Jump Boost or bear morph activated to reach it. The Mega Memory Match can also be found inside of this building.

On the opposite side of where the sprinklers are is a gate that requires 1 Ace Badge to pass through. Behind it, the player will discover another shop. This shop sells the Honeycomb Belt, Crimson Guard, Cobalt Guard, and Honey Mask, which appear to be hanging inside of a large honeycomb. In front of the honeycomb, there is another star jelly token. Behind the honeycomb, there is a secret glass-like passage that cannot be passed. It leads to a void-like area below the map.

Outside, it is decorated with the Badge icon in the menu on top of the entrance, along with a large Basic Sprinkler on the roof. The large sprinkler is not solid and can be walked through. 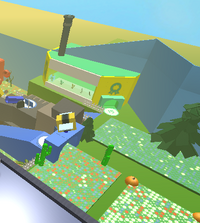 The Badge Bearer's Guild from afar.

The star jelly token inside the guild.

The gate to the second section of the guild. 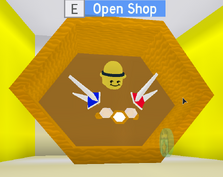 The shop in the interior room of the Badge Bearer's Guild. 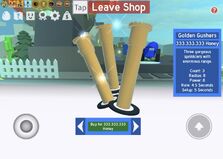 This soundtrack is known as 'Vendor'.

Retrieved from "https://bee-swarm-simulator.fandom.com/wiki/Badge_Bearer%27s_Guild?oldid=340325"
Community content is available under CC-BY-SA unless otherwise noted.