All fields except the Ant Field.

When they spawn, they spit 1-3 jelly bean tokens in volleys over the field which any player can pick up. Then they hop to another location on the field and spit more. The tokens only last for a few seconds, much less time than the tokens spawned from regular jelly beans. After 7-15 volleys of jelly beans, the bean bugs hop to other fields to spit jelly beans. This process repeats until they despawn after a while.

Bean bugs can be very useful for collecting pollen/honey as jelly bean tokens can boost the player’s pollen collection, Critical Chance, Instant Conversion, and other stats.

Players are unable to damage it, nor can it damage players. 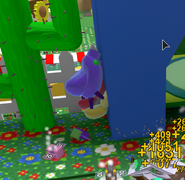 A group of bean bugs that spawned in the large pumpkin.

A group of bean bugs in the Sunflower Field. 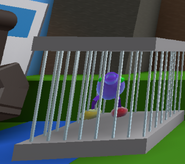 A bean bug inside a cage.

Bean Bugs stuck in a strawberry in the Strawberry Field.

Sun Bear's bean bug outside of its cage.

Retrieved from "https://bee-swarm-simulator.fandom.com/wiki/Bean_Bug?oldid=348986"
Community content is available under CC-BY-SA unless otherwise noted.