The Bear Gate, also known as the 30 Bee Gate, is a gate that requires 30 bees to pass through. It is located past the Mountain Top Field, between the Ticket Shop and the Mountain Top Instant Converter.

It is given its name because of the bear silhouette around it.

Underneath the platform, there is a diamond egg token and Shadow Bear behind it. To reach the egg token, equip either the Parachute or the Glider and make sure your pack is empty so you don't lose any pollen.

The following soundtrack plays past this gate:

Past the Bear Gate, from a bird's eye view.

The Bear Gate viewed from behind, with a better perspective, and at nighttime. 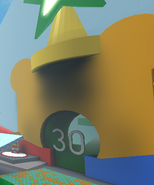 The Enzymes token inside the Bear Gate.
Add a photo to this gallery

Retrieved from "https://bee-swarm-simulator.fandom.com/wiki/Bear_Gate?oldid=307424"
Community content is available under CC-BY-SA unless otherwise noted.