Bond is a mechanic that is the equivalent to the leveling system found in many other games. When bees have a high enough bond with the player, they will level up, gaining the following boosts per level above 1:

Bond can be checked at any time by clicking on the bee's hive slot and it will show the bee's bond and stats.

A bee will automatically gain bond when collecting pollen in a field. When collecting pollen, each bee type has different opinions of each field and either likes, is neutral toward, or dislikes any given field. If a bee has a sad emoticon over its head, it means that the bee does not like that field and will gain only minimal bond from collecting pollen in that field. If it has a happy emoticon instead, it likes the field and will gain extra bond. If it doesn't have an emoticon at all, it's neutral towards that field and will gain the usual amount of bond. Bees can be fed treats to increase the bee's bond by 10, 25, 50, 100, 250, 500, or 1000 depending on the type of treat the bee is fed. If the player feeds a bee its favorite treat, it will gain double the amount of bond it would otherwise get, as well as having a very low chance to become gifted or mutated. Bond is also rewarded from defeating mobs and collecting a Puppy Love token from Puppy Bee.

A bee's bond does not reset after a level up; however, the information window only shows the bond required for the next level, so it can appear as if the bond went down to zero. (This is why when feeding a bee a treat, the server message on the lower right of the screen and the chat will have a different number than the bee information window.) A bee's rarity does not affect how much bond it needs to level up. Both a Common and Mythic bee at level 1 would require 10 bond to level up. Bond does not diminish when using royal jelly or replacing it with an egg.

The formula to calculate the chance of hitting a mob is: 1/[2^(monster level - bee level)].

The maximum level a bee can achieve is 20. It is generally difficult to reach levels above 15, but if a bee reaches the maximum level, the bee will still gain bond.

The following audio plays when a bee levels up: 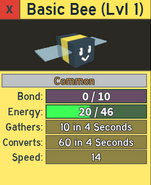 The new design for gaining bond.

Retrieved from "https://bee-swarm-simulator.fandom.com/wiki/Bond?oldid=349952"
Community content is available under CC-BY-SA unless otherwise noted.