Chicks are mobs that can spawn in a variety of places depending on their type. Chicks were added in the Egg Hunt 2020 update. Chicks are able to hide inside their eggshells, increasing their defense and the chance for attacks to be blocked. There are five different types of chicks: chicks, spotted chicks, and hostage chicks are all passive, meaning they can’t deal damage to players; while the Commando Chick and Mondo Chick are hostile, meaning they can deal damage to players. When a chick loses all of its health points, it gets captured, and the game will notify the player in the chat.

Normal chicks are passive mobs that can appear in the Sunflower Field and will spawn randomly when players are collecting pollen. Chicks can spawn with a level of 1-15. Chicks have a high chance of spawning when a player who is doing Black Bear’s Sunflower Corral quest.

30 seconds
Hostage chicks are passive mobs that have a chance of spawning after the defeat of a hostile mob or a boss. However, defeating ants or other chicks will not spawn a hostage chick. They can spawn with a level of 1-15 and will always despawn 30 seconds after spawning. Mobs that are more difficult to defeat, such as Tunnel Bear, are more likely to cause a hostage chick to spawn, and if it does spawn, it will have a higher level than that of a hostage chick spawned from mobs like ladybugs that are easier to defeat.

The Commando Chick is a mini-boss that spawns in the Commando Chick's Hideout to the left of Brown Bear and the Wealth Clock. To cut the vines, the Clippers, Scissors, or Scythe needs to be equipped. Note that once the vines are cut, they will be permanently cut and won't regrow. It has a respawn time of 30:00 (25:30 with Gifted Vicious Bee). Unlike other chicks, Commando Chick throws grenades before going in its egg. (1 if more than 2/3 of it's health, 2 if less than 2/3 of its health, 3 if its health is less than 1/3, 4 if less than 1/100). The egg cracks after 20 seconds. It is also one of two mobs that save its health if the player leaves mid-session, the other being the Stump Snail. It deals 20 damage when colliding with a player and 50 damage when a player is near a grenade when it explodes. Starting at 150 health and level 3, the chick increases in health and level with successive captures, reaching level 6 by the end of the first five captures and growing another level for every 5 captures thereafter. After a player captures a Commando Chick, the game will notify how many Commando Chicks the player has captured so far. The way it attacks is very predictable, as it goes straight towards its targeted player.

There used to be a leaderboard behind where it spawns called the Most Commando Captures Leaderboard. Since 4/7/2020, the leaderboard has been removed.

Standing on the last stair, nearest to Commando Chick's hideout normally makes the chick flee. However, if you stand on the edge of that stair, (as close as you can to the hideout) Commando chick does not flee and so your bees can defeat Commando Chick whilst you take no damage. This strategy does not 100% work as there could be a slight chance of the Chick fleeing. You could just move into the hideout and then back onto the stair again. Another strategy is to get another player to help you defeat the chick.

Note: Many drops will always occur after a certain number of Commando Chick captures.

The Mondo Chick is a level 8 boss mob that can only be found in the Mountain Top Field and always spawns at level 8 with 300,000 health points. It respawns every hour at the full hour, and its respawn timer can be found on the side of the Mountain Top Shop. The respawn time is not affected by the Monster Respawn Time stat, and its rewards are shareable between players. It automatically takes 333 damage each second, causing its health points to reach 300 after 15 minutes. If it isn't defeated within 15 minutes of spawning, it will despawn in a similar fashion of the Commando Chick. Like the Coconut Crab, the faster the Mondo Chick is defeated, the better the rewards will be. It is recommended to put distance between you and the Mondo Chick, as it does a lot of damage and will kill you quickly.

Every so often, the Mondo Chick will hide in its egg, and only come out once 7500 damage has been dealt to it, or 15 seconds have passed. Mondo Chick drops its rewards the same way Coconut Crab and sprouts do. In addition, all the rewards can be shared with other players, similar to sprouts.

There is a glitch where the Mondo Chick would fall into other areas outside of the Mountain Top Field, such as into the Bamboo Field or in front of the Pro Shop. The fallen Mondo Chick will not be able to move. 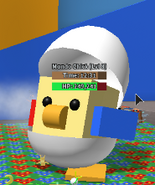 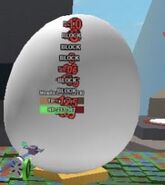 Mondo Chick in its egg.

The respawn timer for the Mondo Chick.

A mythic egg dropped from the Mondo Chick.

A star treat dropped from the Mondo Chick.

The chirping sound made from a chick, spotted chick, hostage chick, and Commando Chick:

The following audio plays when a chick, spotted chick, hostage chick, or Commando Chick breaks out of its egg:

The chirping sound made from the Mondo Chick:

The following audio plays when the Mondo Chick breaks out of its egg:

Retrieved from "https://bee-swarm-simulator.fandom.com/wiki/Chicks?oldid=305682"
Community content is available under CC-BY-SA unless otherwise noted.