The Clover Field is one of the five starting fields a new player can go to. It is protected by a ladybug and a rhino beetle.

This field is a 28x29 field, containing 812 flowers. The flowers are white, red, and blue, in sizes of single and double.

Note: The flowers in fields are randomly generated, so the flower counts above may not be 100% accurate. The percentages should, however, be roughly correct.

A plain view of the Clover Field. 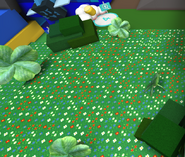 A view of the Clover Field from above. 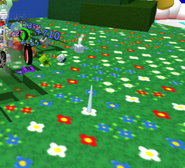 A Rogue Vicious Bee's spike in the Clover Field.

Retrieved from "https://bee-swarm-simulator.fandom.com/wiki/Clover_Field?oldid=350410"
Community content is available under CC-BY-SA unless otherwise noted.