A Coconut is an inventory item that can be used to convert pollen into honey tokens if the coconut lands on the player. It can also collect pollen for the player that summoned it, damage mobs, and can be used in certain crafting recipes.

A maximum of 150 coconuts can be held at a time, making it the item with the highest capacity limit, excluding items that don’t have a capacity limit.

The following audio plays when a coconut hits a field:

When the coconut lands on a player, the player's total hive convert amount is converted into a ring of honey tokens. For example, if a player has 500,000 total hive convert amount and a coconut lands on them, 500,000 pollen would be converted into honey tokens. The amount of pollen stored beforehand is not taken into account of how much pollen is converted.

The amount of honey received from the coconut is multiplied by Honey From Tokens. 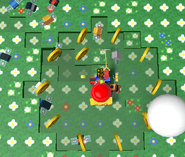 The ring of honey tokens when hit by a coconut.

Retrieved from "https://bee-swarm-simulator.fandom.com/wiki/Coconut?oldid=349997"
Community content is available under CC-BY-SA unless otherwise noted.