Unlike the Stump Snail and the Commando Chick, its health will not save, meaning it must be defeated without leaving the field. If the player leaves, its health will reset and it will go back inside the Coconut Cave. Once defeated, it will take 36 hours (1.5 days), or 30 hours and 36 minutes if the player has a Gifted Vicious Bee, to respawn.

The loot it drops is scattered around the field, similar to a sprout's drops and the Mondo Chick's drops. However, only the player that has killed the specific coconut crab can see them and pick up the tokens. A token link can also be used to pick up the tokens, along with the players windy bee tornado or vector bee triangulate. The quality and quantity of the items dropped vary depending on the time taken to defeat the Coconut Crab, similar to the Mondo Chick.

Note: Unlike all other enemies in the game, (other than Cave Monsters and Ants) Coconut Crab does not drop honey upon defeat. 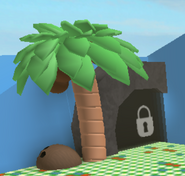 The coconuts summoned by the Coconut Crab's "Coconut Attack".

The Coconut Crab stuck in a wall.