A Cub Buddy is a small, baby version of a bear that accompanies the player around, collects tokens, and provides gifts. Whenever the player's Cub Buddy gets too far away, it will teleport to them to a close proximity.

Cub Buddies have settings that can be accessed and viewed through the Cub Console, which is located on the System Page.

When the player's Cub Buddy produces items, it dances, emits heart particles, and an in-game message will pop up, saying: [🐻(Cub Name) made some gifts!] along with some heart particles around the Cub Buddy.

Cub Buddies will produce gifts which usually contain common items like treats, but can also produce rarer items like tickets or royal jellies. When a Cub Buddy starts to dance and heart particles appear above its head, that means it's about to produce some gifts. These items can be collected not only by the player, but also by token links, Vector Bee’s triangulate ability, frogs, and Windy Bee’s tornado ability. Cub Buddies produce gifts every 1-5 minutes. Similar to sprouts and leaves, the rewards granted by Cub Buddies typically depend on the field the player stands in (e.g. getting 3 sunflower seeds while standing in the Sunflower Field). 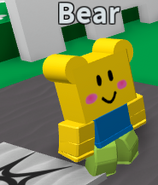 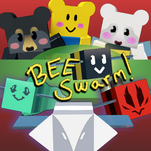 Bee Bear's two cub buddies on top of a present. 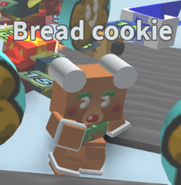 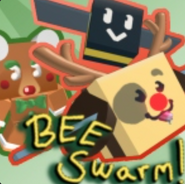 Gingerbread Cub Skin in the game's thumbnail during the 12/25/2020 update. 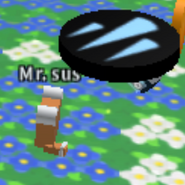 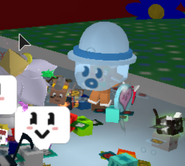 Gingerbread Cub with the Bubble Mask caused by a glitch that was patched.
Add a photo to this gallery

Retrieved from "https://bee-swarm-simulator.fandom.com/wiki/Cub_Buddy?oldid=350382"
Community content is available under CC-BY-SA unless otherwise noted.