Enzymes are an inventory item that grants +10% Instant Conversion and x1.25 Convert Rate for 10 minutes when activated. Using another enzyme will reset the timer, but will not stack. Enzymes can also be used for crafting other accessories or items. Using a super smoothie will automatically override the enzymes buff. 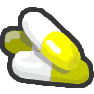 The enzyme token on the other side of Bubble Bee Man in the Bear Gate.

Retrieved from "https://bee-swarm-simulator.fandom.com/wiki/Enzymes?oldid=348826"
Community content is available under CC-BY-SA unless otherwise noted.