All Fields
The Frog is a passive mob added in the 12/23/2019 update. They can be summoned by collecting a summon frog ability token generated by Tadpole Bee or by using a box-o-frogs. Occasionally, frogs may spawn in a random field. They despawn after a set period of time.

Players cannot damage frogs, nor can frogs damage players, meaning that frogs do not act like hostile mobs.

The following audio plays when a frog has been summoned by the summon frog ability:

The following audio plays when a frog collects a token:

A frog using its tongue. 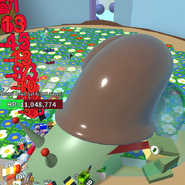 A frog attacking Stump Snail with its tongue.

Retrieved from "https://bee-swarm-simulator.fandom.com/wiki/Frog?oldid=348316"
Community content is available under CC-BY-SA unless otherwise noted.