Gumdrops are an inventory item that was introduced in the 5/26/2018 Gummy Invasion Update. When used, gumdrop blobs fall from the air and splatter goo if they hit a flower. Goo grants an additional 40% bonus honey. Bigger goo puddles yield more honey. Gumdrops can also be used to craft other materials and certain accessories. 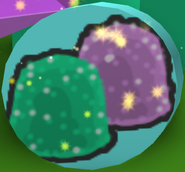 The gumdrops token behind the Gummy Cannon.

The old cooldown notification in the chat box.

Gumdrops falling from the sky. 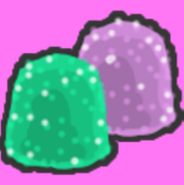 Goo on a field.

Retrieved from "https://bee-swarm-simulator.fandom.com/wiki/Gumdrops?oldid=341889"
Community content is available under CC-BY-SA unless otherwise noted.