Gummy Bear's Lair is a location that can only be accessed by having a Goo Hotshot Badge or above.

To get into the lair, go on top of the Gummy Bee model on the Gummy Bee Egg Claim and use a gumdrop. The player can reach the egg claim by going behind the Ant Leaderboard and following the path (where there's also an ant pass token). They can also use a cannon, such as the Red Cannon, in combination with the Parachute/Glider.

If the player doesn't have the Goo Hotshot Badge, then a message will prompt,

In addition to Gummy Bear and Gummy Bee, the lair contains the Glue Dispenser, as well as a shop that sells the Gummy Boots and the Gummy Mask.

When the player walks up to Gummy Bear, he will say the following in chat and through notifications: 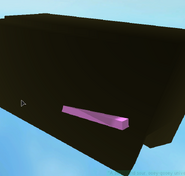 The exterior of Gummy Bear's Lair.

The "yellow dot" from above is the Gummy Bear's Lair.

Retrieved from "https://bee-swarm-simulator.fandom.com/wiki/Gummy_Bear%27s_Lair?oldid=323374"
Community content is available under CC-BY-SA unless otherwise noted.