The Honey Wreath was one of the Beesmas 2020 Machines which could have been unlocked after completing Black Bear's Honey Wreath quest.

When used, it converted all pollen in the player's bag into honey, scattering 8 honey tokens around them for them to collect. It had a cooldown of 30 minutes. Using the Honey Wreath was required for a few of Bee Bear's quests during his 2020 visit, and it was required for Honey Bee's Beesmas Quest.

If the player attempted to use the Honey Wreath without any pollen in their bag, it would still scatter 8 honey tokens. Each one will give a base of 100 honey, totaling to 800 honey.

The Honey Wreath could have been upgraded by completing Honey Bee's Beesmas 2020 quest. This would cause it to grant 50% more honey and also summon a level 20 Honey Bee.

Before completing Black Bear's quest, it would look like an ordinary wreath, and did not have the honey icons decorated on around it. After completing his quest, the wreath is decorated with honey icons and the Flight of the Bumble Egg. It is located between Black Bear and the ticket tent, making it available to any player that has completed the quest. If the player completed Honey Bee's "Honey Bee's Honey Wreath?" quest, it would have a Gifted Honey Bee face in the center of the wreath. 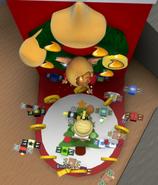 A player claiming honey tokens after admiring the Honey Wreath.

The Honey Wreath after completing both Black Bear's and Honey Bee's Beesmas 2020 quests.

Retrieved from "https://bee-swarm-simulator.fandom.com/wiki/Honey_Wreath?oldid=343372"
Community content is available under CC-BY-SA unless otherwise noted.