A Honeystorm is a server-wide event that can be summoned by using the pad near Brown Bear by anyone who has discovered four Legendary bee types. When summoned, a server-wide announcement will state, "{Username} has summoned a Honeystorm!". Upon being summoned, a golden-yellow fog will appear along with a multitude of honey tokens and some ticket tokens that will begin to randomly appear across all fields. The storm lasts for 20 seconds and has a cooldown of four hours. It can also be randomly triggered, in which the announcement says, "A Honeystorm has been summoned!"

When a honeystorm is summoned, there is a distorted voice clip of IcedTeaLatte saying "Honeystorm", and the honey tokens make raindrop-like popping noises when they appear.

Fields with bigger flowers give higher amounts of honey per token, with their totals being increased by the Honey From Tokens stat. These honey tokens also despawn faster than normal honey tokens.

The message shown when the player has not discovered enough Legendary bee types to summon a honeystorm.

The golden fog of a honeystorm. 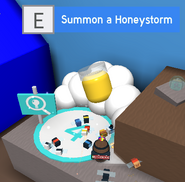 Retrieved from "https://bee-swarm-simulator.fandom.com/wiki/Honeystorm?oldid=340516"
Community content is available under CC-BY-SA unless otherwise noted.