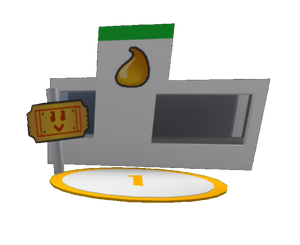 The Instant Converter is a machine used to immediately convert pollen into honey, similar to a hive, but instantly and without the use of bees.

There are three Instant Converters that can be found in the game:

Each machine costs one ticket to use and has an independent cooldown of 15 minutes.

The player's Honey Per Pollen rate also applies to the Instant Converter, just like it would at the hive.