King Beetle's Lair is the location where King Beetle spawns. It can be accessed from the light green door between Blue HQ and under the Clover Field and next to the far end of the Blue Flower Field. Inside the lair, the exit can be accessed by climbing a ladder leaning on one of the walls in the lair. The interior of the lair is completely empty, except for the ladder for leaving. Both doors are one-way. The player will be pushed through either door if they stand too close, even if they aren’t moving. The entrance to the lair cycles in color, so it stands out from the rest of the environment.

It is located right under Clover Field and is between the Blue Flower Field and the Noob Shop.

The King Beetle spawns on the back wall adjacent to the Noob Shop and Lava Obby.

Near the back right corner of the lair, there is some text on the floor: "Song Name". It refers to the song that plays inside the lair and is a hint to the code, "Crawlers".

This audio is known as "Crawlers" and also plays inside the Commando Chick's Hideout and the White Tunnel. 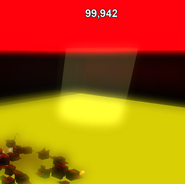 A sprout in the Clover Field as seen in the lair.

A spike as seen from the lair (with the honeystorm pole visible at the top right). 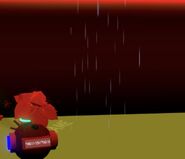 A cloud in the Clover Field, seen in the lair.

Retrieved from "https://bee-swarm-simulator.fandom.com/wiki/King_Beetle%27s_Lair?oldid=340974"
Community content is available under CC-BY-SA unless otherwise noted.