A light purple fog will appear, and meteors will start raining down on 3 random fields. Those that are chosen will have light purple boxes falling from the sky on them (similar to the pollen haze box), indicating that meteors are falling on those fields. The prizes scale with size. The smaller the meteor, the more valuable rewards are given. The chosen fields change approximately every minute. If the Meteor Shower was activated by a player, the meteors will collect and instantly convert pollen for them. The amounts collected are based on the number of Mythic and Gifted Mythic bees in their hive. The event lasts for 3 minutes and the chosen fields will swap a total of 2 times during that time period.

When a player stands on the drop zone of a meteor (which is indicated by a purple circle), the reward tokens will be distributed in a line across the field, usually leading to the drop zone of another meteor. The number of tokens per meteor is determined by the number of Mythic bees in the summoner's hive, while the rarity of reward tokens changes with the size of the meteor drop zone (with rarer items tending to be more common the smaller the meteor). Tokens produced by the Meteors can be collected with token links and other means of token collection. The drops are not affected by a player's loot luck.

The following audios play when a meteor shower is summoned:

A mythic meteor shower being summoned. 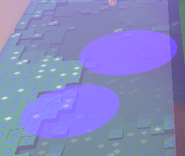 The line of loot from a mythic meteor.

Onett summoning a mythic meteor shower under an alias.

Retrieved from "https://bee-swarm-simulator.fandom.com/wiki/Mythic_Meteor_Shower?oldid=350136"
Community content is available under CC-BY-SA unless otherwise noted.