The Naughty List was a Beesmas 2020 machine that is unlocked after completing Bubble Bee Man's Beesmas quest. It was located on top of the 30 Bee Gate, next to Night Memory Match and Bubble Bee Man.

It can be used to try and kill all the players in the server by summoning falling coal on top of them; this can easily be avoided by getting out of the area (which is marked with a giant green circle) where the coal is going to fall. However, if killed by the coal, the players that died will receive a beequip called Lump of Coal and a buff called Beesmas Repentance, which gives 1.05x Capacity, +1% Bubble Pollen, +1% Blue Pollen, +1% Blue Flower Field Pollen, +1% Pine Tree Forest Pollen, +1% Stump Field Pollen, +1% Movement Collection Pollen, +1% Bee Attack and +1% Loot luck for 2 hours. Players could have used the Naughty List every 8 hours. 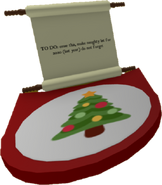 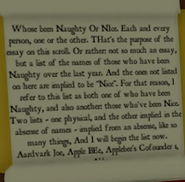 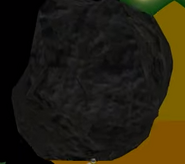 The coal that attempts to kill you when someone uses Bubble Bee Man's naughty list. 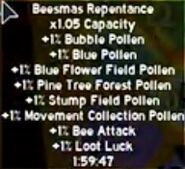 Retrieved from "https://bee-swarm-simulator.fandom.com/wiki/Naughty_List?oldid=342717"
Community content is available under CC-BY-SA unless otherwise noted.