watch 02:45
Wiki Targeted (Games)
Do you like this video?
Play Sound

The Parachute is a gliding tool that can be purchased at the Pro Shop for 500,000 honey. It allows the player to glide through the air. Its description reads, "A parachute you can use to glide down the mountain and reach new places! Press jump while in the air to open."

To activate it, jump, wait until you are about to fall down, then jump again; if you just jumped into the air, jump once more, but if you got airborne through some other method (a cannon, for example), then double-jump. To disengage, just jump. The gliding feature is hardcoded to the player and you will still glide even during a lag spike (The parachute doesn't appear immediately).

Though it is slower than walking, the Parachute enables the player to glide to places on the map that would otherwise be inaccessible through walking. It is vital to collecting many of the royal jelly and ticket tokens around the map and to perform several shortcuts. The Parachute can also be used to dodge mobs since most of them can't "detect" the player while they're in the air. To get the most out of the parachute, use the cannons to have access to a wider selection of locations to travel. 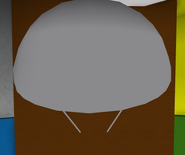 The Parachute in the Pro Shop.

The Parachute's description view in the Pro Shop.

The Parachute being used.

Retrieved from "https://bee-swarm-simulator.fandom.com/wiki/Parachute?oldid=345248"
Community content is available under CC-BY-SA unless otherwise noted.