The Pineapple Patch is a field located behind the Brave Bee Gate and to the right of the Pro Shop. It is protected by a level 4 mantis and a level 5 rhino beetle.

This is a 35x23 field, containing 805 flowers. The flowers are white, red, and blue, in sizes of single, double, and triple.

Note: the flowers in fields are randomly generated, so the flower counts above may not be 100% accurate. However, the percentages should be roughly correct.

The methods below are no longer possible 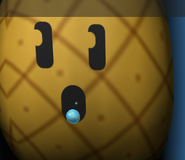 The Pineapple's face when it is blowing sparkles. 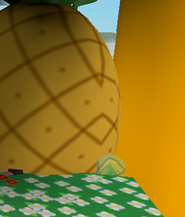 The ticket token on the giant pineapple.

Retrieved from "https://bee-swarm-simulator.fandom.com/wiki/Pineapple_Patch?oldid=349550"
Community content is available under CC-BY-SA unless otherwise noted.