Plastic Eggs were blue-colored eggs that were scattered around the map for Brown Bear’s 2019 Egg Hunt Quest. The player had to find all three to finish Brown Bear's Egg Hunt Quest to obtain a marshmallow bee. They had no special abilities and were removed when turning in the quest. The locations were replaced by ticket tokens after the Egg Hunt 2019 ended and the 5/13/2019 update.

Its description reads, "Turns in 3 to Brown Bear for a prize!" 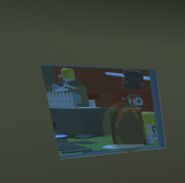 A plastic egg inside the Lava Parkour.

A plastic egg behind the Honey Bee NPC.

A plastic egg inside of the Blue Maze.

Retrieved from "https://bee-swarm-simulator.fandom.com/wiki/Plastic_Egg?oldid=349723"
Community content is available under CC-BY-SA unless otherwise noted.