Not to be confused with Ornament Presents.

A Present was an inventory item associated with Beesmas. Presents were awarded by Bee Bear, Onett, and the code "ByeBeeBear" (expired). After the 4/5/2019 update, players cannot obtain nor use presents.

During the special dialogue, a prompt would pop up, and there were two choices:

If the present that was given to the NPC was not intended, rejoining the server would have escaped the dialogue.

Not only could presents be awarded by Bee Bear and Onett, but they could also be obtained by finding present tokens that could be found around the map in different places. 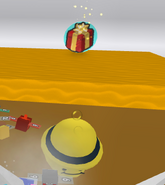 Retrieved from "https://bee-swarm-simulator.fandom.com/wiki/Present?oldid=290327"
Community content is available under CC-BY-SA unless otherwise noted.