Near the Rose Field and above the Sunflower Field

The Red HQ is a large, red building with a portal, a shop, and other features. It is located next to the Rose Field and near the Special Sprout Summoner. To enter, the player must have discovered 4 different red bee types. The Red HQ is the counterpart to the Blue HQ.

On the roof, there is an enlarged Scythe. Unlike the actual Scythe, the one on the Red HQ doesn't emit fire particles.

On the first floor, there are five things that can be interacted with:

There is a ticket token hidden near the back of the ceiling visible from the ladder. To reach it, build up stacks of haste, then climb the Red Teleporter and jump to it. The player may need boots and/or the parachute/glider.

The player can climb two ladders to reach the other sections of the HQ. The first ladder leads to a royal jelly token on the roof next to the base, as well as the Strawberry Dispenser. The second ladder leads to the top, where the player will find the Top Riley Bee Helpers Leaderboard and Gifted Riley Bee, who requires a translator to be able to be communicated with. After the player gets a translator from Science Bear and uses it on Gifted Riley Bee, they can complete quests them. The player will also find the code "ROOF" on the back side of the white facade, near the large Scythe.

In the Beesmas event, the player needed to have used a translator on Gifted Riley Bee in order to be able to give it a present or do his quest.

There is a store in the Red HQ which sells six items. To open the store, press E when you're not on the Red Teleporter or the Red Field Booster. 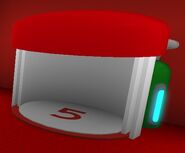 The Red Field Booster, which is in the interior of the HQ. 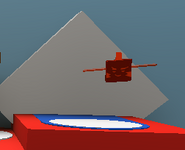 Gifted Riley Bee on top of the Red HQ.

Retrieved from "https://bee-swarm-simulator.fandom.com/wiki/Red_HQ?oldid=342250"
Community content is available under CC-BY-SA unless otherwise noted.