According to the damage done by you and level

This page is for the rogue version of Vicious Bee. For the tamed version, see the Vicious Bee page.

Rogue Vicious Bee is a boss mob that can spawn in the Clover, Spider, Cactus, Rose, Mountain Top Field, or the Pepper Patch. Rogue Vicious Bee has a higher chance of spawning during the nighttime and is guaranteed to spawn by using a night bell.

Rogue Vicious Bee has a small chance to spawn as a Gifted variant (roughly 1 in 30-40 chance, or 2.5-3.3% chance). It has more health, attack speed and doubled damage. In return, it drops a much larger amount of stingers.

One can tell if a Vicious Bee spawned if a spike sound is heard. The player will need to find it hiding in a field with a small grey spike (golden if gifted), sticking out; it will attack if a player gets near its spike. Everyone in the server will receive a notification when a Vicious Bee attacks a player via a server-wide message: "⚠ (Gifted) Vicious Bee is attacking {Username} in the {{Clover/Spider/Cactus/Rose/Mountain Top} Field/Pepper Patch}! ⚠". When it is defeated, a similar message announces: "🎉 (Gifted) Vicious Bee has been defeated! 🎉".

Vicious Bee attacks players by summoning spikes from the ground. It has two attack patterns - tracking and then attacking randomly. The higher the level the bee is, the greater the number of spikes summoned. Red circles show where a spike is about to appear. The spikes will do approximately 40 damage to players with no defense, 50 if gifted. Gifted Vicious Bee’s spikes form quicker, allowing it to move more often.

Upon defeat, Vicious Bee drops stingers and honey. Bees gain 50 bond plus an additional 50 for every level of Vicious Bee above 2. The amount of honey rewarded is based on the total damage you dealt to the bee. Stingers are awarded as long as you deal damage to the bee, even if the player stops before it is fully defeated, and/or if they get killed. The higher the level of the bee, the more stingers are yielded. A daily bonus of 5-7 Stingers is also given for the first Vicious Bee one has killed that day, with a cooldown of 22 hours after the daily reward.

If Vicious Bee is in attack mode but there is nobody in its attack range (for example, if the player it was attacking leaves the server, and there is no other player nearby), it will despawn, and a server-wide message will announce: "Vicious Bee left..."

A spike in a field where Rogue Vicious Bee is hiding. 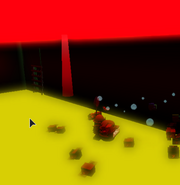 The bottom of a Clover Field spike is visible from King Beetle's Lair.

A Rogue Vicious Bee spawning inside of a firefly.

A golden spike in a field where Gifted Vicious Bee is hiding.

Retrieved from "https://bee-swarm-simulator.fandom.com/wiki/Rogue_Vicious_Bee?oldid=237688"
Community content is available under CC-BY-SA unless otherwise noted.