Royal Jelly is an inventory item that can be found as a token on the map, received as quest rewards, redeeming valid codes, or purchased from various shops or dispensers. When used on a bee, it turns it into either a Rare, Epic, Legendary, Mythic, Gifted Rare, Gifted Epic, Gifted Legendary, or Gifted Mythic .

Royal jelly does not necessarily turn a bee into a better rarity. For instance, if players use it on a Legendary bee, they have the same 70% chance of getting a Rare bee as if they had used it on a Basic Bee.

As of the 4/17/2019 update, royal jelly tokens are back to their original spots.

There are numerous methods to obtain royal jelly.

Besides its normal form, there are other variants of Royal Jelly that have different effects on the bee it is applied to.

Star jellies will randomly turn any bee into a gifted bee with the same rarity chances as normal royal jelly.

Other uses of Royal Jelly 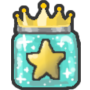 The royal jelly token in front of Bubble Bee Man.

5. Using a specific jelly on said bee (eg. using a Bubble Bee Jelly on a Bubble Bee) will not use the jelly, and no transformation pop-up will appear.
6. Event Bee jellies can't make the bee gifted even if it was gifted before.
7. The plural for royal jelly is incorrectly spelled as 'Royal Jellys', rather than 'Royal Jellies'. This is a mistake that has happened with other items with a plural form that exchanges a 'y' for 'ies'.
8. Using a normal jelly on a gifted/mutated bee will almost CERTAINLY make the bee lose its mutated/gifted status.

Retrieved from "https://bee-swarm-simulator.fandom.com/wiki/Royal_Jelly?oldid=308938"
Community content is available under CC-BY-SA unless otherwise noted.