Stockings were a Beesmas 2020 machine that was unlocked after completing Brown Bear's Beesmas quest. They were located at the bottom of the hill that Brown Bear is on, next to the Clover Field. When used, they spawned a random beequip, as well as 2 random items in front of the stockings. It had a 1 hour cooldown. 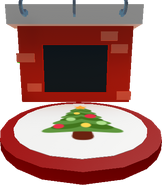 The Stockings' appearance before the player completed the "Brown Bear's Stockings" quest. 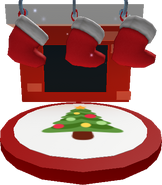 The Stockings' appearance after the player completed the "Brown Bear's Stockings" quest.

A player claiming items after checking inside the Stockings.
Add a photo to this gallery

Retrieved from "https://bee-swarm-simulator.fandom.com/wiki/Stockings?oldid=341244"
Community content is available under CC-BY-SA unless otherwise noted.