The Sunflower Field is one of the five starting fields that a new player can go to. There are no mobs that protect this field.

This is a 20×33 field, containing 660 flowers. The flowers are white, red, and blue, in sizes of single and double.

Note: The flowers in fields are randomly generated, so the flower counts above may not be 100% accurate. The percentages should, however, be roughly correct. 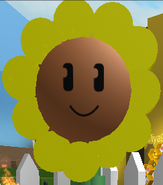 The sunflower's face when it is going to produce sparkles.

The Sunflower Field at night.

Oil from the Sunflower Field.

The Sunflower Field during the day.

The sunflowers face when producing sparkles

Retrieved from "https://bee-swarm-simulator.fandom.com/wiki/Sunflower_Field?oldid=340058"
Community content is available under CC-BY-SA unless otherwise noted.