2 Days (48 hours), 40 hours 48 minutes (if the player owns a Gifted Vicious Bee)
Not to be confused with Shadow Bear.

Tunnel Bear is a hostile level 9 boss. Tunnel Bear is 1 of the 5 bosses in the game, the others being King Beetle, Stick Bug, Coconut Crab, and the Mondo Chick. It has a timer of 2 and a half minutes.

Tunnel Bear respawns every 2 days (48 hours), but it can instead respawn every 40 hours and 48 minutes if the player owns a Gifted Vicious Bee.

If Tunnel Bear does not appear and instead a countdown timer floats in mid-air, then that means the player defeated it too recently, so they will need to wait for the countdown on the respawn timer to finish before battling Tunnel Bear again.

Tunnel Bear possesses 10,000 health and can instantly kill players if they get too close to Tunnel Bear ("Too close" is not the same as "touching"). However, Tunnel Bear moves very slowly at a constant speed without ever speeding up, and on a very predictable path as it heads straight towards the player's location. Because of this, players could follow the recommended strategy of walking in front of Tunnel Bear, staying just close enough for their bees to keep attacking, and lead it down the tunnel.

For an alternative strategy, pre-activate rage tokens using the Pineapple Patch enemies or Stump Snail. When you entering the tunnel, keep Tunnel Bear near the beginning of the White Tunnel, keep close to one of the walls on the sides, and occasionally jump around Tunnel Bear. This alternative will only work at the beginning (before the exit) because the White Tunnel narrows down the further players go down it, trapping them if they head too far in it. However, this should be the chosen strategy for the first defeat as to ensure getting the gifted egg. If the player's bees are mostly level 9, they will not have to jump around it, as their bees will most likely kill it first.

If the player defeats Tunnel Bear late, some items may appear outside of the tunnel past the winking eye face. Token Links can help with this, along with simply killing it faster.

Try to walk from one side of the tunnel to another, as this will take Tunnel Bear longer to get to the end of the tunnel.

Note that unlike other mobs, Tunnel Bear drops its tokens in a straight line when it gets defeated.

Note: Players can possibly get more than one of a single type of drop (for example, 50 treats and 500 treats from the same defeat). Note also that the likelihood of all of these drops increases based on Loot Luck.

Tunnel Bear falling down when a player enters the tunnel. 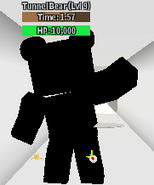