All Fields except the Stump Field and the Ant Field.
This page is for the Hostile version of Wild Windy Bee. For the tamed version, see Windy Bee.

The Wild Windy Bee is a mini-boss that can spawn in the Dandelion Field, Pineapple Patch, Pumpkin Patch, Mountain Top Field, and Coconut Field.

During the Beesmas event, Wild Windy Bee can also spawn in the Clover Field, Spider Field, Bamboo Field and Pepper Patch in addition to the fields that it normally appears in.

When a Wild Windy Bee spawns, the player needs to find a floating cloud over a field with Windy Bee inside. It will be camouflaged inside the cloud and have a distinct white trail. Touching the Wild Windy Bee in time will initiate the fight. The starting level of Wild Windy Bee upon discovery is random but can only go up to level 6 (unless spawned by Onett).

When Windy Bee starts its attack, all players on the server receive the message: ☁️ (Username of the Player) found Windy Bee in the {Field Name}! ☁️. When the Windy Bee's HP reaches 0, the bee will drop rewards and immediately move to a random field, excluding the Ant Challenge and Stump Field. It leaves successively better rewards behind each time it's forced to move. When it leaves the map after its 5-minute timer elapses, the server states: ☁️ Windy Bee is fleeing... ☁️.

Continuously moving chimes on the Wind Shrine indicate that a Wild Windy Bee is on the map, either camouflaged or fighting in the open.

Upon defeat, Wild Windy Bee leaves behind a cloud in the middle of the field that regrows flowers (like a cloud vial). Players underneath the cloud gain a 25% pollen boost (50% if the player owns a Gifted Windy Bee) for up to 8 seconds. A ring of tokens then appears underneath Windy Bee like Stick Bug, and each player gets their own loot ring unless the player does not deal enough damage. Afterward, Windy Bee flies off to a different field. Wild Windy Bee will continue doing this for 5 minutes before fleeing.

Every time Wild Windy Bee is defeated, it levels up with more health, similar to Stick Bug. It also has a higher chance of dropping Cloud Vials and rarer items.

The formula to tell how much health Wild Windy Bee has per level is:

Note: This table only goes up to level 25. If you want to go beyond that, use the formula shown above. However, do not add more to this.

Every time Wild Windy Bee is defeated, the following rewards may be dropped. Defeating Wild Windy Bee too many times in a day will greatly weaken drops. The value of drops depends on how much damage the player deals to it (For example, If a Wild Windy Bee has 1000 health, two players are fighting it and one deals 200 damage and the other 800, the second player would get better rewards).

The rewards below are no longer obtainable.

A cloud with Wild Windy Bee inside in the Coconut Field. 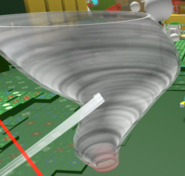 The message when someone finds a Wild Windy Bee.

The message when Wild Windy Bee leaves the server.

A level 6 Wild Windy Bee in the Coconut Field.

A Wild Windy Bee in a cloud growing a moon sprout

A Wild Windy Bee with a Rogue Vicious Bee.

Wild Windy Bee in the cloud seen from in front.

A person getting flung out of the map from Windy Bee's gust attack.

Retrieved from "https://bee-swarm-simulator.fandom.com/wiki/Wild_Windy_Bee?oldid=350215"
Community content is available under CC-BY-SA unless otherwise noted.